To tie in with our inquiry into Water this term we wanted to explore some of the creatures that live in and around the water.

We settled on an Albatross to explore for our art as it provided lots of different aspects we could bring together.

We started by sketching an Albatross 4 times to practise our technique. We used a 4 part sketch where each sketch is made with different information.

The 1st sketch is what you think an Albatross looks like

The 2nd sketch we looked at pictures of an Albatross

The 3rd sketch we took feedback from a buddy. We shared something we liked and something we though they could try on their next sketch

Next we traced around an Albatross to use for our final art piece. Then we carefully cut around it and finally added detail like the shading on it's wings and the nostril hole, eye and beak.

The last stage was to make our background. We first experimented with colour mixing by adding white paint to blue to gradually make it lighter. We used sponges to dab our paint and added many layers to give our ocean a sense of movement and texture.

Posted by Carl Pynenburg at 14:46 No comments:

This week we were tired of B getting all the attention so we had to put it in jail... 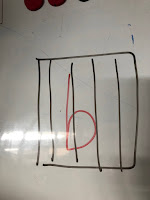 Our hero D was finally here and we practised writing the letter d without the fear of getting it mixed up with that pesky letter 'b'.

Check out our awesome dinosaur stories! 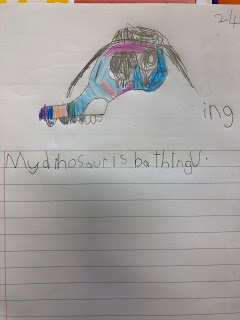 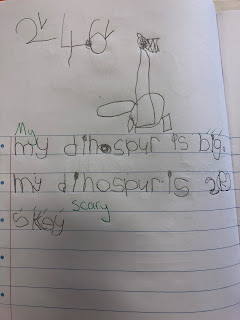 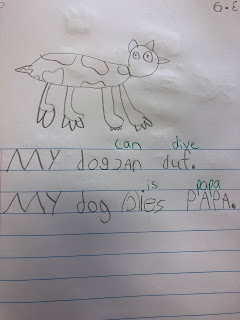 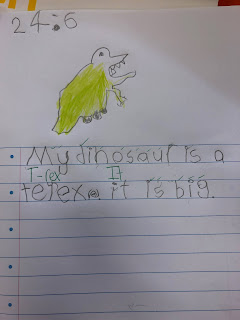 Posted by Carl Pynenburg at 11:16 No comments: 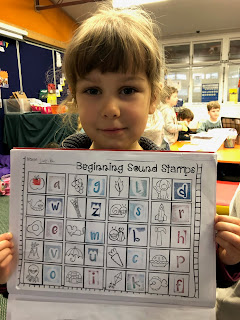 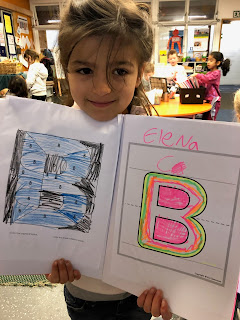 It's 'B' Week in Autahi this week!

One thing we notice in Autahi is that sometimes we get the letter b mixed up with the letter d.
So this week we threw the letter 'd' in jail so we could learn all about what makes the letter 'b' so special.

Next week we will explore the letter 'd' to get to know it a bit more before finishing with a b and d week to end the term. 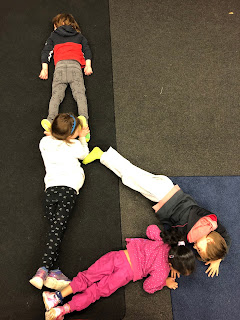 Posted by Carl Pynenburg at 09:46 No comments:

Email ThisBlogThis!Share to TwitterShare to FacebookShare to Pinterest
Labels: literacy, literacy through play

The Robots Are Coming

Digital Technology: the robots are coming to Autahi ...

... but don't be alarmed: we know how to programme them!

We often describe children as 'digital natives': they have never known a world without iPads, smartphones and computers and often display a remarkable affinity for technology. Knowing how to use technology effectively and responsibly is a vital skill. But our Digital Technology learning goes deeper than this. At the heart of the Digital Technology curriculum is the aspiration that students become creators as well as users of technology.

This means learning to think like a computer scientist, also known as Computational Thinking. We are learning the skill of breaking down tasks into precise, step-by-step, unambiguous instructions. These step-by-step processes are also known as algorithms.

We began with an algorithm that we're all too familiar with right now: washing our hands. In Autahi, we have a great hand-washing routine going. We worked together to write step-by-step instructions for this. Then, we tried mixing up the routine. What if we dried our hand first? What if we finished off by wetting our hands or putting soap on? This made us laugh a lot because it seemed so silly. But it was also pretty clear to all of us that this algorithm just wasn't working: we had to follow the instructions in the right order to get the outcome we wanted (in this case, clean and dry hands).

Next, we became robots. As robots, we responded to four commands only: forward, back, right and left (if your child brought stickers with l and r home with them on their hands, now you know why!). Using these four commands, we practised directing our robots towards a target.

The robots could only do exactly as they were told so the instructions had to be precise.

We tried this on a grid in the playground. We found that we had to tell our robots exactly how many squares to travel, as well as the direction.

Sometimes our robots did unexpected things. This is where debugging comes in. Our students are learning that robots will follow their instructions exactly. So, if their instructions aren't right, they won't get the results they are hoping for. This can very funny - and sometimes frustrating. Either way, it needs sorting out. We work on using our Perseverance to find the bug and fix it.

This week, we have been using the same four instructions to move a Pacman around a grid to gobble
up all the pellets.

Next time, we will start recording our instructions. This will be challenging: if we write an algorithm for Pacman, can another person follow it? Will Pacman get to gobble the pellets?

Watch this space. (Now time for the binary solo...)
Posted by Beth Wyllyams at 20:00 No comments: 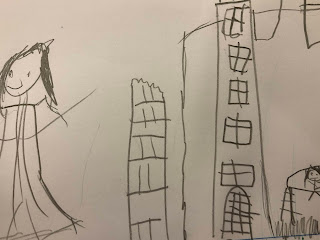 Our first strategy is planning for our writing. Often this includes talking and sharing stories about our experiences and supporting this with a picture to help us keep our ideas in our heads. 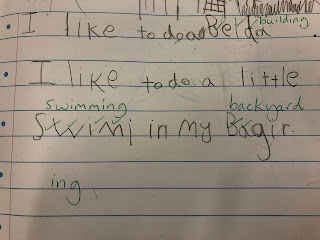 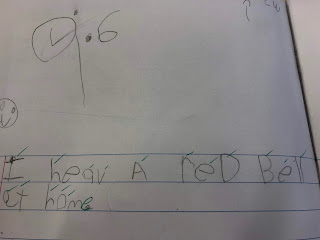 These next example show that we are using sounding out strategies to help us listen for sounds, find the letters and then write what we can hear. In these examples you can see where we have ticked above the dominant sounds that the writers have recorded. We do this together with our writers so that they can see where they have been using this strategy. 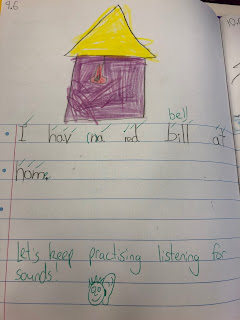 Lastly is a quick example of some of the feedback we are using to help our writers. All the feedback is given verbally through a conversation with the writer as well as recorded in their books. Sometimes a little picture helps to keep that goal fresh for them. I have been experimenting with different visual reminders. Can you spot my illustrations and what it is referencing?

These are just some examples of what we are doing in writing. We have a webinar coming up on the 25th of June that will dive a little deeper into writing as a journey across the school. If you would like to know more then please join us or come and have a chat with Beth and I.

Join Carl, Ximena and John for a webinar on how writing develops at school via Zoom, on Thursday 25th of June from 6:30-7:15 pm. The Zoom meeting details will be sent via our school email on Wednesday 24th of June.

Posted by Carl Pynenburg at 16:10 No comments:

Maths lends itself so well for problem solving and exploring concepts in new and exciting ways. This week some of our learners ventured outside the classroom to explore making number lines on our courts using chalk. They had to think about where each number would have to go.

We explore numbers in lots of different ways to help grow our understanding of what they look like and how they fit together.

Stay tuned to Seesaw as we post up more of the activities we get up to in class.
Posted by Carl Pynenburg at 11:06 No comments:

Our inquiry is heating up!

This week we have continued our exploration of water and things have certainly heated up.

Water can take many different forms but a sometimes it is hard to see the change happening. We tried two different experiments this week by challenging ourselves to turn ice into water and another to catch the steam from a jug on a mirror and see what happens.

We discovered that the hotter we made the ice, the faster it melted into water.

The next day we put water in a jug and predicted what would happen to the water.
Then we carefully placed a mirror over the jug and noticed that water was appearing on the surface of the mirror.

How had the water jumped from the jug to the mirror?

We had a few ideas: 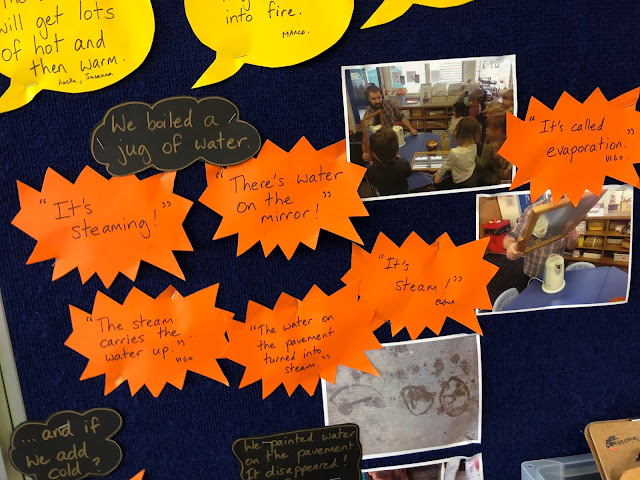 Posted by Carl Pynenburg at 08:26 No comments:

Thank you for visiting our blog. If you are reading this, please take a minute to leave a quick comment saying who and where you are. A strong sense of audience is a key aspect of generating the best possible writing. We hope you enjoy your visit and come back soon!

2. DON'T LINK A PHOTO DIRECTLY WITH A STUDENT NAME.

4. WOULD BE GREAT TO SEE PEOPLE COMMENT ON EACH OTHER'S POSTS.